Being close up to a structure like the Kingsferry bridge is great. I have to be honest and say that I didn’t even know it existed until I started walking up the Swale. I have been over the ‘big’ bridge, which I now know is the Sheppey Crossing, and I had heard the name Kingsferry Bridge and just conflated the two, completely eliminating the structure I was going to walk over. There is no dismissing it on foot. It is a beautiful, monumental, grand thing, which I suspect may be a rather romantic view considering the number of people I talked with who have bemoaned being stuck on or off the Island when the bridge is elevated.

To save you a wiki-wander, here’s a little info.

The bridge is powered by an electric motor beneath the road. The bridge has engine rooms on either side, which operate the wire ropes and counterweights that lift and lower the bridge. The bridge has been raised over 100,000 times and every lift has to be recorded. The bridge can only be lifted when the Sittingbourne railway signalman gives authorization, once a train travelling across the bridge has passed the relevant track section.

The maximum bridge lifting height is 84 feet and, when full height has been attained, a klaxon is sounded for confirmation.

I crossed over, marvelling at the bridge’s grandeur and solidity and sheer mass. I like it very much.

The road I walked along runs parallel to the main A249 road, and is a busy B road, but the views to the right are of the Minster, Stray and Cheyney Marshes, which were lush and glowing in the sunshine. Laurie, my as yet unbeknownst to me host, told me that as kids leaving the Island, her family would play Spot the Heron driving past here. She has a bird thing, which you’ll see from the photos.

I planned to walk into Elmley. When I got the the entrance on that Tuesday afternoon to find the gate shut and a sign saying closed Tuesday, I really did chastise myself for lack of planning! There was a stile, which invites a walker, though, so I climbed over and walked along the path through the three marshes I had viewed from the road. It was very quiet, and on reflection, having been back since, I was very lucky not to be in the middle of a herd of grazing cows and their calves, as the road is theirs to access if they like! I have since learned that walking in is potentially disruptive to the nesting birds Elmley works so hard to protect, so do heed the signs about staying in your car when you go. It’s a must see, but more on that later!

I got as far as the Dray, where I met two more walkers who had come over from Herne Bay. We chatted for a bit before they carried on back to the entrance, and I, taking a moment to catch up on Facebook, Twitter, and Instagram while perched on the ground with the sound of a slurping swan to my right, found that I had an offer to stay with Laurie Harpum. About face to Minster!

I walked back out of Elmley, hoping to return later on my stay on Sheppey. I reached the Lower Rd on the way to Minster, having passed some comical chickens (why are they so funny!?) on the Wallend Rd. The Lower Rd was a challenge as it’s very busy, and definitely not pedestrian friendly. It was a relief to turn left, toward the sea and Laurie’s and Nev’s home.

When I arrived, Laurie showed me round, watered me enough to revive me a bit and said that she had a rare Tuesday girls night Chinese planned. She invited me to join her and her friends, Boo, Sally, and Lisa. There was so much talking and laughter that the only image I have (too busy – Chinese and ladies night, what do you expect?!) is of a fossilised shark tooth that Laurie gave me that evening. She finds these on the beaches at Minster and Warden, and it is a lovely treasure and memento of that day. It was fun spending the evening with a group of friends, who like all close groups of people love to talk about their exploits with a new person, part story telling, part reliving the moments. It made me reflect on the fun I have had with groups of my own friends and family, and how much these sessions of sharing keep us bonded, and laughing, and when needed, coping with life.

The next day, Laurie showed me round her studio and talked about all the work she is doing for Love Sheppey x. She gave me a stone from last year’s Event, one of over 2000 that she planted all over the Island for the first event. Another treasure!

Our route took us out of Minster, through Rushenden, Queenborough, Bluetown, and Sheerness leading to Barton’s Point. Choosing a circular route was possible because Laurie had offered to take her cute French import VW Campervan over to Barton’s Point for me to camp the night. What a treat to wake in the morning next to the lake. Laurie clearly loves her home here on Sheppey, and started Love Sheppey x to celebrate the creative people who live here. The lead up to this year will keep her busy, no doubt, but she is a woman of boundless energy and enthusiasm. She collects “ex”- animals (to borrow a Monty Python euphemism!) for her art work, so if you have knowledge of anything useful, do let her know! Laurie has moved on from spotting heron from the car window to making beautiful work using the fragile and delicate structures of creatures. She cares about her Island, and I can see why. Love Sheppey? Yes, I do. X 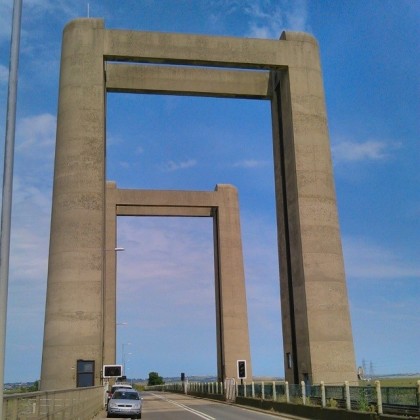 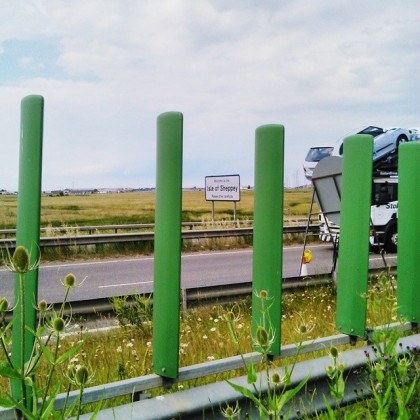 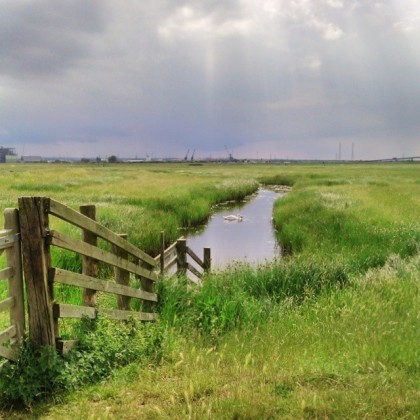 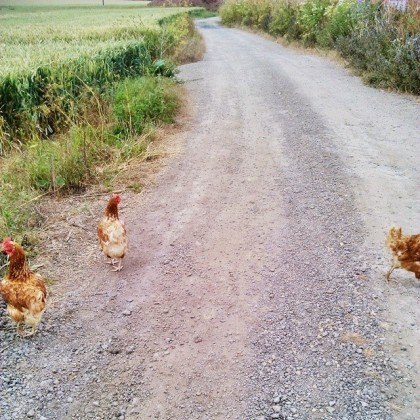 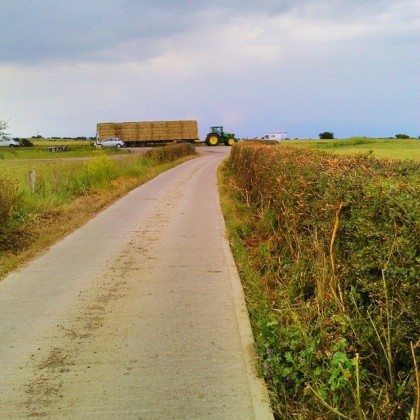 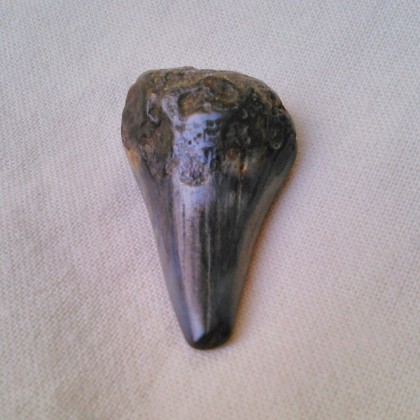 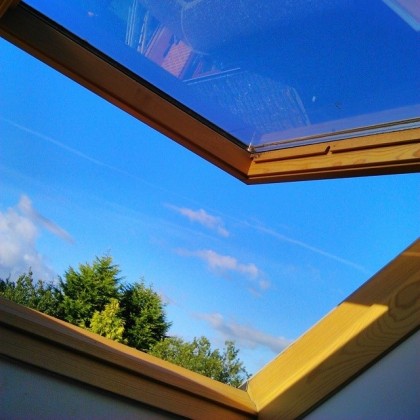 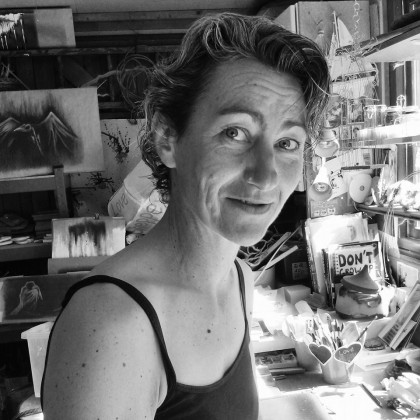 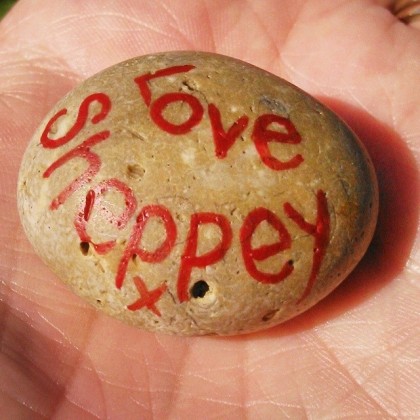 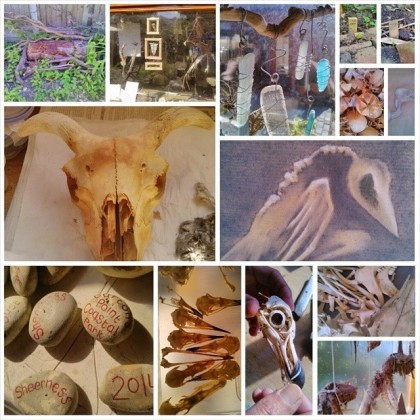 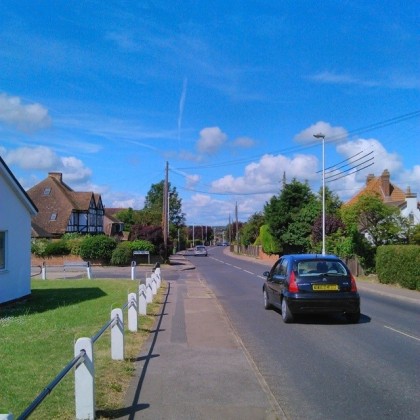 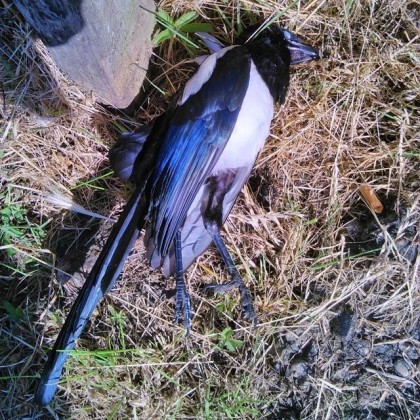 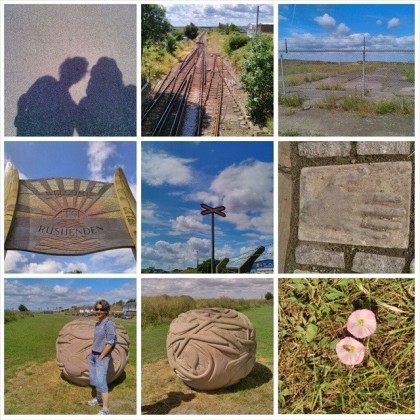 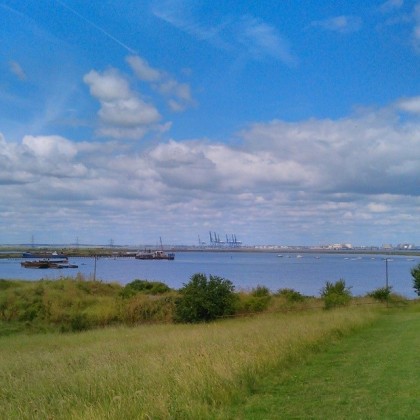 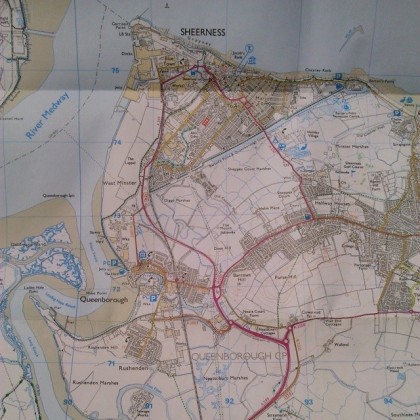 A slight detour down the lane toward Elmley

Lower Rd Sheppey ahead - a very busy road, not for walking

The view from my bed at Laurie's and Nev's

Laurie gives me a tour of the studio

A gift from Laurie - my very own Love Sheppey x stone

A find for Laurie, placed gently on the side of the road for later collection

Looking out over Loading Hope Reach toward Queenborough, sheerness and the Isle of Grain

From Minster to Rushenden, Queenborough, Bluetown, and Sheerness to Barton's Point