Laurie had given me an instant porridge for breakfast in the Campervan, which was a good start to the day. She met me to collect the keys, and I could tell she was concerned for me heading off on my own, offering to walk a bit further. She wrote to me later and said she had begun to feel responsible for me, which, in the few days I spent with Laurie, made sense. She strikes me as a committed, hardworking, thoughtful person, one who takes on responsibility willingly, without thought for herself. I reassured her that I’d be ok and set out. I had thoroughly enjoyed my time exploring with Laurie, but I was also looking forward to wandering alone. I love walking on my own. I don’t get bored, and if I do, I certainly forget it very quickly.

Leaving Barton’s Point Recreation Centre, where we’d had a fish supper the night before, I walked back up the path, left the lake behind me and headed for the sea where we’d walked into the site the day before. The wide promenade toward Minster is lined with Memorial benches, and a whole series of different exercise gadgets, which was a mystery at first. Dog walkers and walking groups share the wide sea view with the houses lining the bank up above easily. I talked with Colin and his dog Charlie by the new beach huts on the cliffside. Colin frequently visits Sheppey from Sittingbourne to give the car a run out and Charlie some fresh air. I told him about the Walk Swale Medway project, feeling concerned that due to his age he might not be ‘a computer person’. He told me that when he retired, he decided to get computer lessons, reminding me not to make assumptions about people! The evening before, he was sorting out his broadband, and commented that it had taken awhile to get someone to explain each step patiently, but that he’d gotten it sorted. We talked about how isolating it might be to be completely out of touch with computers. He and Charlie were a lovely pair to spend time with.

Cliffs don’t feature in Faversham, so it was good to see the dramatic landscape at Minster, though it is badly eroding, perhaps more so with the past winter’s weather. At the end of the groins, there is a set of steep steps (I counted 107, but you’ll have to double check!). I cut through a caravan park in search of Plough Rd, which was quiet enough with little traffic, and delightfully shady.

The only other person I met before Eastchurch was Jean, at the start of the footpath off Plough Rd. She jumped when I said hello and said (once she’d recovered) that she was tending vegetables in her friend’s garden. She comes over to the Island from Teynham a couple of times a week to keep an eye on things, making and changing plans as she goes. It is so quiet out in the country on Sheppey. There’s a real feeling of space. I repeatedly had the feeling that it might be best to keep quiet about Sheppey – maybe all these visitors liked it as a secret getaway. I think I’d like to keep it to myself a bit.

I followed the footpath that had run alongside Jean through some fields and farmland. Just before reaching the Lower Rd in Eastchurch, I had a call from Mr F. We’ve been married a long time, and even in our early years could wipe the floor with anyone playing Pictionary, due to our own personal wavelength of communication. I have guessed objects from single line drawings of his that remain mysterious to friends to this day. When he said “Where are you?” I knew that meant that he was somewhere nearby. He had come to deliver postcards and badges left behind from the launch of the walk. My hero!

I tried to do some writing in the pub after Mr F left me that afternoon – it didn’t work at all. Aside from the distractions of a pub – I am a hopeless eavesdropper in public places – I just kept nodding off to sleep, my drowsy brain melding my dreaming thoughts with overheard conversations in odd ways. My finger kept straying across the touch screen and erasing whole sentences at a swipe! Walking makes me sleepy. Typing makes me sleepy. I didn’t stand a chance. At least I’d been able to charge up some gear, use the WiFi, and keep up with social media, which I do enjoy.

Packing up, and leaving the pub quietly, I walked toward Sue’s and Danny’s house, glad of the evening cool. I was nearly there when I remembered my map. At the pub. So, just a little further then! 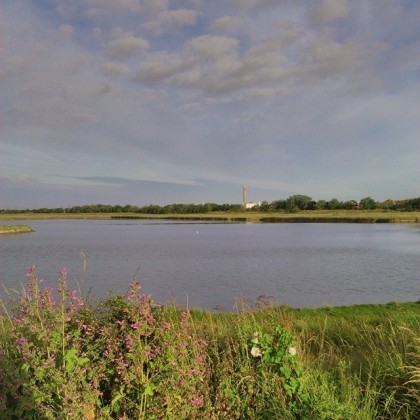 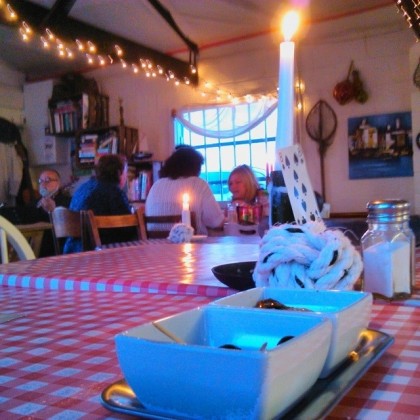 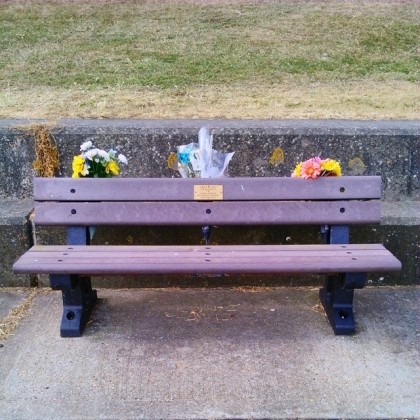 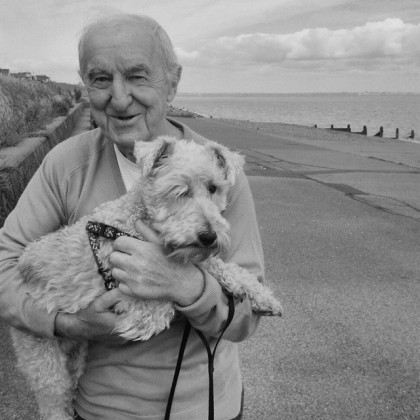 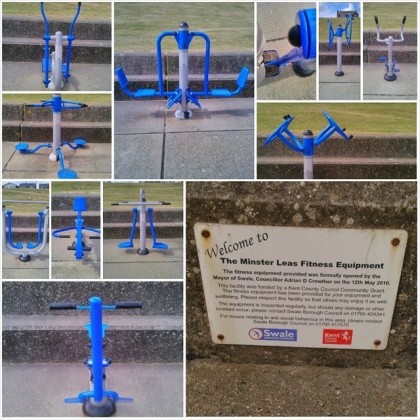 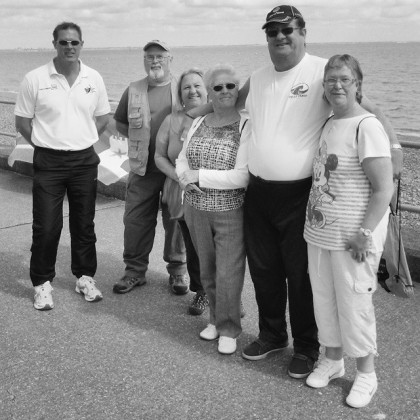 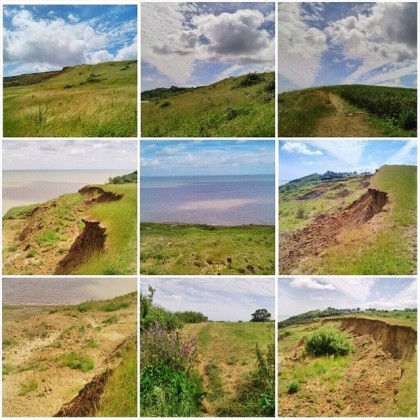 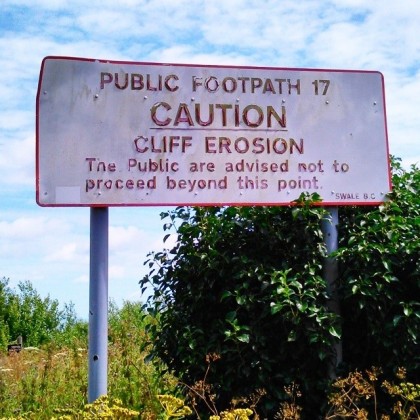 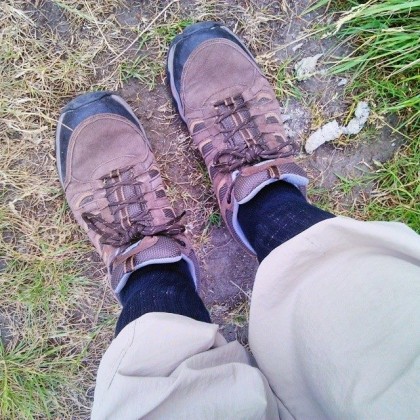 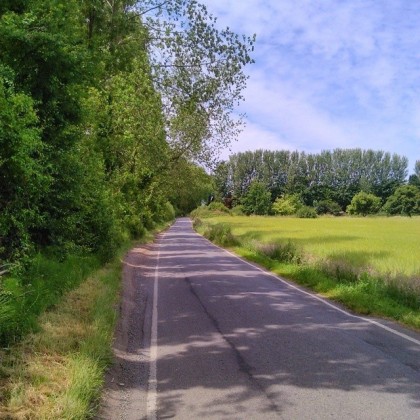 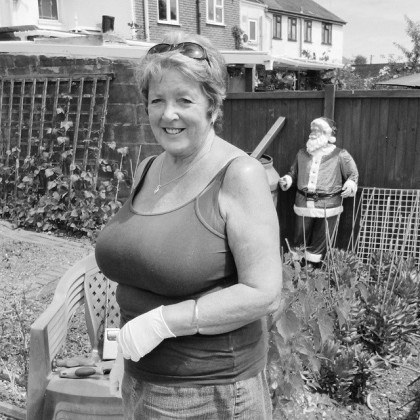 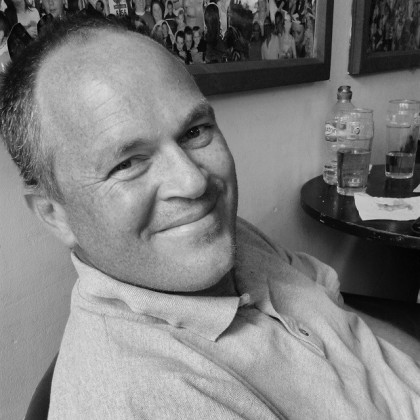 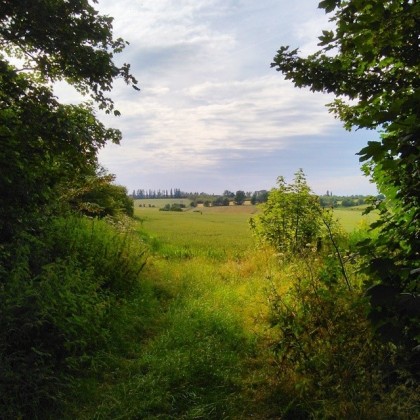 Morning light on the Lake at Barton's Point

Colin and Charlie on Minster Leas

Cliffs along the North side of Sheppy

Anti ticks and anti fashion at the same time

Jean, tending in her friend's garden

Mr F to the rescue!

Nearly there - on the way to Danny's and Sue's